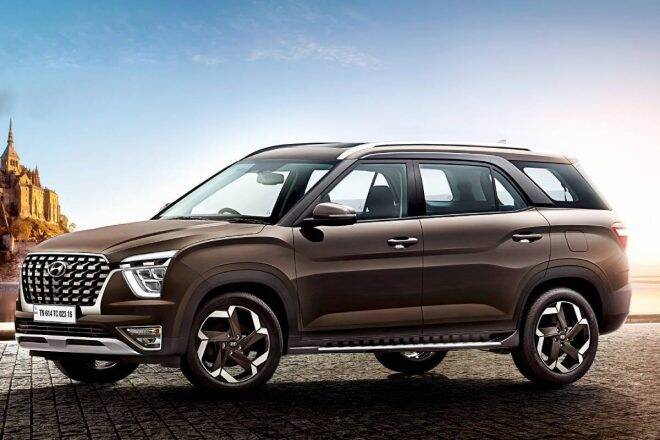 The Hyundai Alcazar, priced between Rs 16.30 lakh and Rs 20 lakh, is the latest three-row SUV on the block. It is based on the Creta, but offers an additional third row, with the option of 6- and 7-seater configurations.

Here are ten major differences between the Alcazar and its five-seater version.

The most important highlight is the addition of the third row over the Creta, which is a 5-seater model. The Alcazar is offered in 6- and 7-seater configurations, depending on the variant you choose. For the 6-seater variants, you get individual seats for all three rows, whereas the 7-seater comes with a Creta-like three-seater bench for the second row.

While the Creta offers a wireless charger at the front, the Alcazar additionally offers one for the second row passengers as well (only for the 6-seater variants). However, there are still limited mobiles that support this feature.

Hyundai has equipped the Alcazar with front and rear parking sensors, while the Creta misses out on front sensors, one of the most useful features when it comes to parking and in bumper-to-bumper traffic.

The Hyundai Alcazar comes with a 360-degree camera while the Creta only gets a rear parking camera and rear sensors. Mainly, the Alcazar offers a rear camera as standard fitment.

The Alcazar comes with a blind view monitor, a segment-first feature. It assists the driver in changing lanes by providing a live view of the blind spots on either side. The view will be displayed on one of the digital readout dials of the instrument panel.

The Alcazar gets a 2.0-litre petrol engine that is rated at 159PS and 191Nm. It is around 44PS and 47Nm more powerful than the Creta’s 115PS/144Nm 1.5-litre petrol engine. The latter also comes with a 140PS 1.4-litre turbo-petrol engine, which is about 19PS less powerful. The Alcazar actually borrows its engine from the Tucson and Creta, offering 8PS more.

8. A Different Automatic Gearbox For The Petrol Engine

While the Creta’s petrol engine is paired with a CVT And DCT (Dual Clutch Automatic for turbo-petrol), the Alcazar gets a 6-speed torque converter automatic. The latter gets 6-speed manual and automatic transmissions for both the powertrains.

9. Longer And Taller Than The Creta

The Alcazar is about 200mm longer and 40mm taller than the Creta, with a 150mm longer wheelbase as well. The width, however, remains the same as its five seater version.

10. Loads Of Safety Tech As Standard