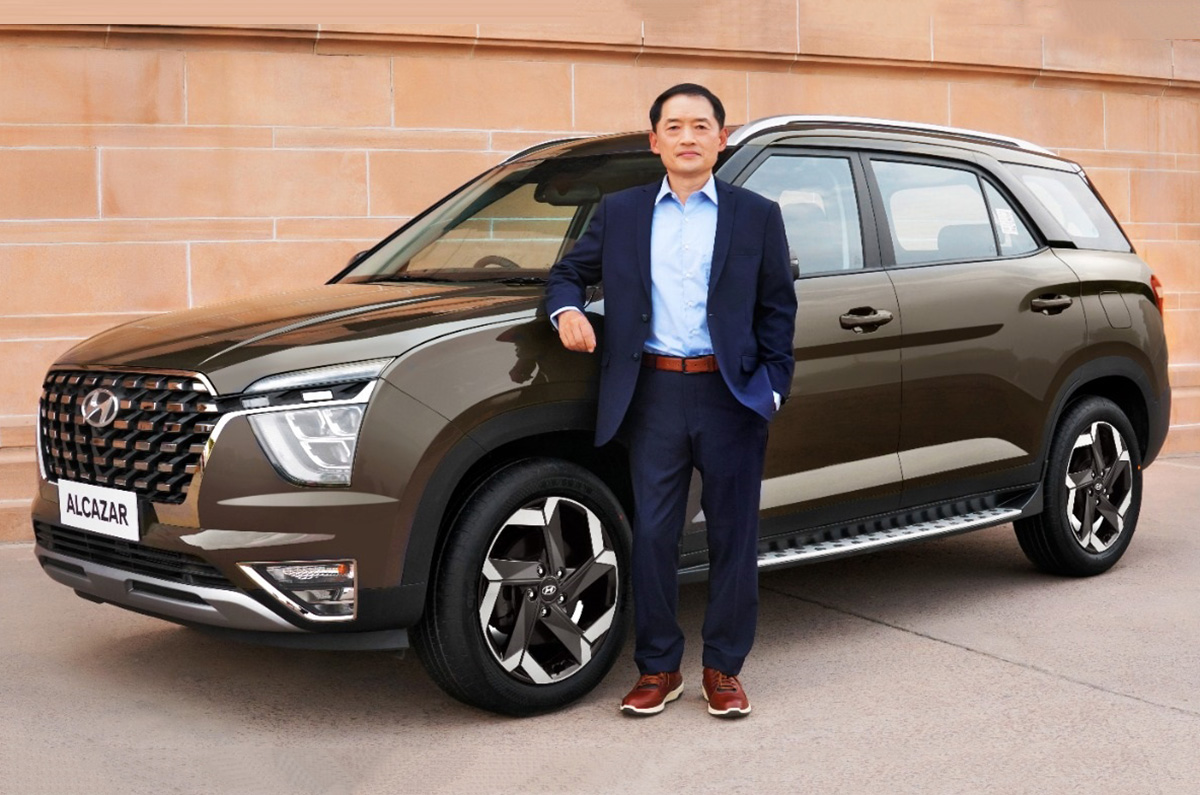 Our first experience with the 7-seater Creta is a brief one. But has it left a lasting impression?

People know the Alcazar as a 7-seater Creta, and the Creta needs no introduction. And by virtue of this logic the Alcazar is a pretty straightforward SUV, sparking little curiosity. However, Hyundai has added more masala to this flavour to spice things up. Namely a much longer wheelbase, more features, new engine and distinctive looks. How different can these elements make the Alcazar from the Creta? And more importantly, can these make the experience better than what we got with the Creta?

It would have been fun answering these questions right now, but we were hit by an embargo from Hyundai which said we can neither show you nor talk about the interiors in much detail. And the exterior too has been dressed in this extensive camouflage. However, we have covered most aspects here that will help you decide whether the Alcazar is right for you.

Speaking of the same elements, it gets the same LED headlamp setup as the Creta. However, the grille has a more premium look thanks to its multiple chrome elements. The fog lamp cluster too has been revised.

From the side, the first thing that will hit you is the length of the Alcazar. To offer as much room as possible, the Creta’s platform has been stretched to its limits. Result: a 150mm increase in wheelbase. And at 2760mm, it is longer than its rivals, the Safari and Hector Plus. Most of this length has been accommodated in the rear door, which also made for better ingress and egress to the third row of seats. Also, to go with this added bulk, the Alcazar sports 18-inch wheels, a size larger than the Creta. However, 17’s will be offered on the lower variants.

The rear sees more conventional tail lamps and the boot gate design is also a bit more vertical for it to look more mature. Now, we still have to wait a few more days to find out how the SUV looks in the flesh without this camouflage. But one thing’s for sure, the size does make it look like an elder sibling to the Creta, and not just a longer Creta.

With 180 litres of space behind the second row, the Alcazar will hold a couple of soft bags and laptop bags in the boot. This is more than the 73 litres offered by the Safari and the 155 litres offered by the Hector Plus. The rear seats can further fold flat with a 50:50 split to open up more room.

The cabin experience when you sit in the driver’s seat is pretty close to the Creta. The dashboard and centre console layout is exactly the same. However, here you get a black and tan dual-tone color scheme on the plastics and upholstery to make the cabin feel more upmarket. There’s a 360-degree camera with a vibrant display on the infotainment screen. Other features from the Creta like the 10.25” infotainment system, panoramic sunroof, wireless charger, ventilated seats, powered driver seat, branded sound system, cooled glovebox and an air purifier will still be part of the cabin.

Hyundai has focused on the second row experience of the Alcazar to differentiate it from the Creta. In the 6-seater configuration, the Alcazar gets captain seats. These seats have added cushioning and a different seat base angle for better comfort. And this is the party trick: the second row centre console. It looks like the front centre armrest and has storage underneath, 2 cupholders and a wireless phone charger. Very useful! Both rear seat passengers also get front seatback folding trays with a mobile slot and a cup holder. These seats can recline and slide as well to get into a more relaxed sitting position. The bench seat, however, gets a regular armrest which does not feature cupholders. Still, you get recline and slide functions, plus the seatback trays.

To improve the rear seat experience further, extra sound deadening material has been used in the Alcazar to make the cabin better isolated. And like the Creta, you still have rear AC vents, window shades and the large panoramic sunroof.

The added length to the door has resulted in a bigger opening to access the rear row. This was important as the centre console would prevent occupants from walking to them, the ideal scenario in captain seats configuration. Plus, both the bench and the captain seats fold and tumble to make access for adults easier.

Once there, the space is enough for adults under 6 feet and for most children. The knee room is just right, headroom is ample and while the seats are low, they will remain comfortable for short journeys inside the city. Children won’t complain on inter-city journeys as well, especially because they get their own AC unit with blower controls and vents, cup holders and USB charging points.

Another place where the Alcazar sets itself apart from the Creta in the powertrain options. While the diesel unit is still the same 1.5-litre block in the same state of tune (115PS / 250Nm) with the 6-speed manual and the optional 6-speed automatic, the petrol motor is now the latest generation 2.0-litre naturally aspirated one (159PS / 191Nm), which is also being offered with a 6-speed manual and the optional 6-speed automatic. We got to experience the petrol-manual powertrain on our drive.

The first thing you notice is the refinement. The motor is super smooth at startup and quiet as well. Start moving and it revs freely, giving you the freedom to exploit the rev range. You can choose to drive leisurely, in which case you upshift early, and the SUV just feels relaxed. The gearing allows you to sit easily in second and third gear in city traffic and offers fantastic driveability. This is where you will find efficiency as well. But if you want to feel lively, get on the gas and it revs with a good sound feedback. It picks up pace effortlessly. While there is no surge in power like in a turbo engine, the pace here is masked by the quietness of the cabin and the linear pull of the engine. Hyundai claims a sub 10s time to reach 100kmph and we will surely put that claim to the test.

The diesel engine is in the same state of tune as the Creta. However, the gearing has been altered to deal with the added bulk of the Alcazar.

The 18 inchers on the Alcazar had us a little worried about the ride. Especially given the low-ish 215/55 profile. To our surprise, the ride felt well controlled. The suspension manages to filter imperfections of the road surface quite well. Even the level changes were dealt with with composure, given you did mind your speed. The cabin also felt well insulated from both the engine and suspension. This would mean a very comfortable commuter and an able tourer in the real world. Final thoughts, though, are still reserved for a real world road test.

The steering effort on the Alcazar is mapped with the drive mode in the automatic transmission variants. In the manual, there are no such modes. Neither for drive, nor for traction or steering. But the default setting gives you little to complain about. It’s light at low speeds and weighs up nicely for highway stability. Good for family use.

In our first preview, the Alcazar has proven to be a bigger Creta. But not the way you are thinking. It’s big in size, bigger in experience, gets more seats and features, and offers a different powertrain as well. Essentially, these changes make it a bigger SUV of the same family, and not just a stretched out Creta. More will be revealed soon as the launch is pegged to happen early in May 2021. Expect the prices to be Rs 70,000 to Rs 1.5 lakh over the Creta in different variants, and that gives us an expected price range of Rs 10.5 lakh – 19 lakh, ex-showroom. And at that price, it will undercut both the Safari and the Hector Plus, making for a promising proposition.