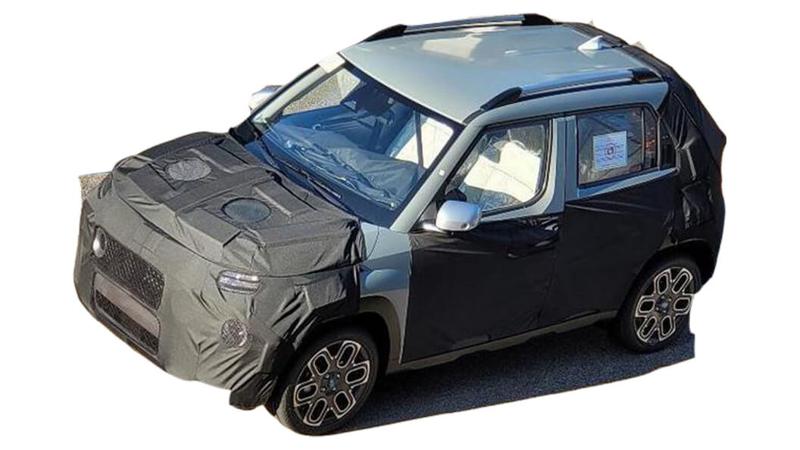 With the newly explored micro SUV segment which is currently occupied by the Maruti Suzuki S-Presso, Mahindra KUV100, Ignis and the upcoming Tata Hornbill (codenamed HBX concept), Hyundai is gearing up to introduce its vehicle codenamed AX1 concept. The prototype of the model has been spied on several occasions in the home country of the car manufacturer.

The micro-SUV will be based on the smaller K1 platform which also underpins the Santro in the company’s lineup. The overall dimension of the prototype poses an upright SUV-ish type stance, tall-boy design with bumper-mounted headlamps and big mesh-type centre grille as seen on the Venue. On the side, is the straight roofline with C-pillar mounted door handles and six-spoke alloy wheels. The rear does not give out any design details due to the large sheet covering but there is a bumper-mounted number plate slot with square-shaped rear defoggers. Also, there are no details available with respect to its interiors.

Upon arrival in India, it will be placed below the B-segment compact SUV, the Venue and will be the smallest SUV in the South Korean car-maker’s India portfolio. There are no details with respect to the expected powertrain options on the car but we can expect it to come powered by small displacement engines with manual and automatic transmission. The AX concept if launched in India could be priced between the Rs 4 to 7 lakh price bracket and we can expect Hyundai to reveal it at the next Auto Expo.