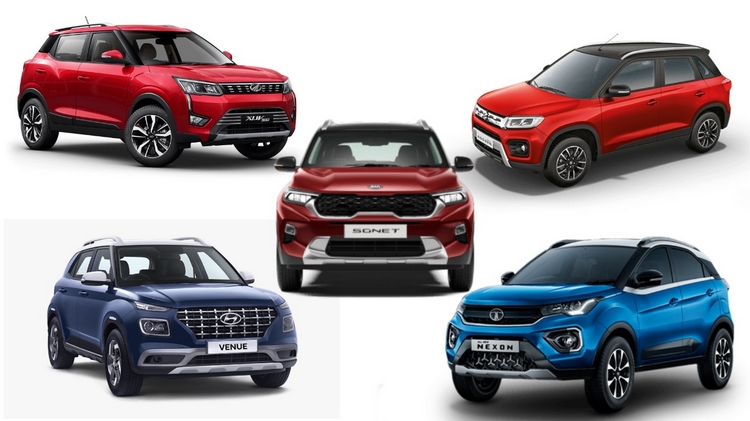 While small hatchbacks account for the majority of passenger vehicle sales in India due to affordability and fuel efficiency, the Indian automotive industry has seen a huge shift towards budget SUVs in the last 5 years. Indians always had an inclination towards big cars, both due to status symbol and state of our road networks. However, affordability has always been a concern, and most people who wanted to own an SUV, end up buying a sedan instead.

Now with manufacturers finding a sweet spot in the small urban SUV segment, both buyers and makers are benefitting from compact SUVs. The number of offerings in this segment alone can be quite overwhelming. Thus, in order to help you make a buying decision, we’ve compiled a list the top 5 SUVs that you can buy in India under INR 10 lakh*. Here’s the list-

Kia Motors, a notable automaker from South Korea, within a short span of one year has managed to make a distinctive mark for itself in India with cars like the Seltos and Carnival. For its next act in India, Kia has decided to put its bet on the hotly-contested compact SUV segment and launched the Sonet SUV. The all-new Kia Sonet gets at a starting price tag of INR 6.71 lakh*, making it the most affordable compact SUV in the country, despite competing against cars like the Maruti Brezza and Hyundai Venue, among others.

A few notable features from the Seltos have been carried over to the Sonet. This list  includes a 10.25-inch HD touchscreen infotainment system, built-in eSIM for UVO car connectivity feature, automatic climate control with integrated air purifier, wireless charger and electric sunroof, among others. As for the powertrain, there are four engine and five gearbox options to choose from including, a 1.0-litre turbocharged petrol motor, a 1.5-litre petrol unit and two 1.5-litre turbocharged diesel units with different state of tunes. In terms of gearbox options, there’s a 5- and 6-speed manual, 6-speed iMT, a 7-speed DCT and 6-speed automatic gearbox on offer.

The Hyundai Venue shares its platform and engine options with the aforementioned Kia Sonet. However, the Hyundai Venue was the first SUV in India to get connected car technology called BlueLink and also the first one to get the iMT (intelligent manual transmission) in India, beating the Kia Sonet to the punch. Since its launch, the Venue has garnered an impressive response in the domestic market and a major chunk of its sales comes from the popular 1.0-litre turbo-petrol variant.

The OG compact SUV of India is also the most-sold small SUV of India. It managed captured the fancy of Indian buyers as soon as it was launched in 2016. To put things into perspective, more than 5.5 lakh units of the Vitara Brezza have been sold since its launch four years ago. At the 2020 Auto Expo, Maruti-Suzuki launched the updated Vitara Brezza with a petrol engine for the very first time, in lieu of replacing the famed 1.3-litre DDiS diesel variant. An automatic gearbox was also added, replacing the AMT with the previous iteration. Rest of the changes included mostly cosmetic updates.

Speaking about the new powertrain options, it gets the widely-used indigenous 1.5-litre K-series petrol engine. The engine produces 104 bhp and 138 Nm of output. There’s also a 5-speed MT on offer alongside a 4-speed AT. In terms of fuel efficiency, the MT version delivers 17.03 kmpl and AT version returns 18.76 kmpl mileage. The price of the Maruti-Suzuki Vitara Brezza starts at INR 7.34 lakh*.

In many ways, the Nexon has put the Tata’s name on a global level as a home-grown safe car manufacturer, a feat achieved despite owning brands like Jaguar-Land Rover. The Tata Nexon was awarded a full 5-star crash test rating by Global NCAP, an independent body which tests cars from various countries with no individual testing agency, such as India. Nexon not only elevated Tata’s brand name but also helped further India’s image in international market as a country of safe carmakers and not just affordable carmakers.

Leaving that aside, the Tata recently added a facelift to the Nexon. The update has resulted in a distinctive change in its overall appearance and the addition of more features. In terms of powertrain options, there’s a 1.2-litre turbo-petrol engine called Revotron and a 1.5-litre turbo-diesel engine called Revotorq. Gearbox options include a 6-speed manual and an AMT. Prices for the Tata Nexon start at INR 6.99 Lakh*.

The XUV300 is an attempt by Mahindra, the largest UV maker in India to tap into the compact SUV market of India. The XUV300 derives its name from the bigger XUV500 7-seater SUV. Unlike its bigger brother, the XUV 300 is a 5-seater SUV. Like the Tata Nexon,  it was also awarded a 5-star safety rating by the Global NCAP. However, score wise, the XUV300 is the India’s highest rated SUV with the best score for adult safety.

The XUV300 was also the first car in India to offer variable steering input to enhance the driveability based on your driving style. In terms of powertrain options, the Mahindra XUV300 gets a turbocharged 1.2-litre petrol and 1.5-litre diesel engine options, both of which are developed and tuned in-house by Mahindra. It also gets highest torque in the segment with a rating of 300 Nm for the diesel variant and 200 Nm for the petrol. The engines are offered with an option 6-speed manual and a 6-speed auto transmission unit. Prices for the Mahindra XUV starts at INR 7.95 Lakh*.