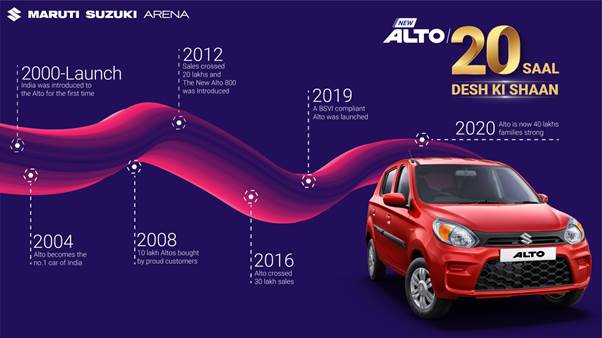 The Maruti Suzuki Alto has completed 20 successful years in India. Launched way back in 2000, the entry-level hatchback has catered to the needs of over 40 lakh Indian households in its rich career of two decades.

The Alto, over the past two decades, has changed the way India commutes. It has ranked as the No.1 selling car in the last 16 years and continues to win hearts and surprise Indian car buyers with its exciting value proposition. Today, it resonates with over 40 lakh delighted customers thanks to its magnetic brand positioning. It has strengthened its appeal with every upgrade and has become the preferred choice for first-time buyers. We’ve seen that nearly 76% of Alto customers have selected it as their first car in 2019-20 which has further increased to 84% for the current year. Now, the brand Alto is aptly positioned as ‘Desh Ki Shaan’, as it instils a strong emotion of pride amongst its 40 lakh customer base, a feat unmatched by any other car in India.

Just 4 years after its introduction, the Alto grabbed the ‘India’s no.1 Selling Car’ title and by 2008, Maruti Suzuki had sold over 10 lakh units of the affordable hatchback. The journey of the Alto continued with an evergreen sales chart and today, after being in the market for 20 years, it has crossed the 40 lakh sales milestone.

The Maruti Suzuki Alto has gone through numerous changes and upgrades in its entire lifespan. Its latest version comes with several modern-day features such as a touchscreen infotainment system, ABS with EBD, dual airbags, dual-tone interior, power steering, internally adjustable ORVMs, and more.

The Alto is available in 8 variants with prices starting from INR 2.94 lakh* and going all the way up to INR 4.36 lakh*. The engine on offer is a 796cc 3-cylinder motor which produces 47 bhp of maximum power at 6000 rpm and 69 Nm of peak torque at 3500 rpm. For the transmission, there is a 5-speed gearbox. The Maruti Suzuki Alto also comes in a CNG avatar which is capable of delivering 40 bhp and 60 Nm.