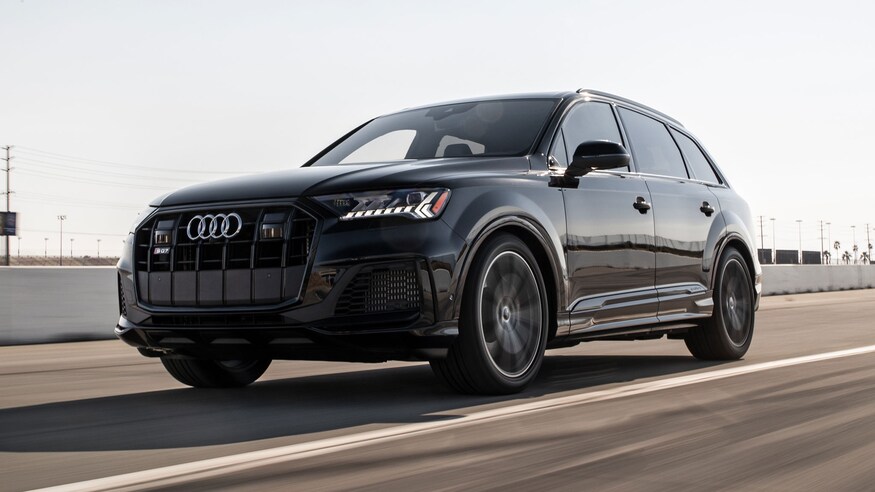 Need a family SUV that’s comfortable to drive around town but has a dose of performance? The Audi SQ7 will deliver exactly that. With its 4.0-liter twin-turbo V-8, Ingolstadt is delivering the more powerful version of its three-row crossover to American families for the first time and giving enthusiast parents the chance to combine their wants and needs.

As part of its midcycle update, the Q7 is getting a host of important changes. Starting with its face, the SUV gets a new grille, which replaces the horizontal slats with vertical ones while keeping its octagonal shape. New LED headlights bring part of the Q8 styling to the Q7, and higher trims can get the matrix pattern with laser light beams. Audi’s cool sequential turning lights remain and now provide an animated light show similar to what the A8 and Q8 do when the vehicle is locked or unlocked.

View Other 2021 SUV Of The Year Contenders And Finalists Here

We only had access to an SQ7 during our SUV of the Year program, limiting our exposure to the high-performance (and highly expensive) variant.

“I don’t think anybody’s buying a three-row SUV for the engine noise and note,” senior features editor Jonny Lieberman said. “But if you are, you might want to start with this SQ7.”

Judges enjoyed the SQ7’s ride quality and comfort; others called out its torque-rich powertrain and well-balanced architecture. “Having driven just about every SUV based on the MLB platform, the SQ7 is exactly what you’d expect—competent, comfortable, and nice to drive,” features editor Christian Seabaugh said.

But when a family crossover lacks ample room for the family, it stands out. Every judge noted the poor third-row space and its challenging entry/exit. “Neither the second nor third row seems to be particularly adjustable,” head of editorial Ed Loh said, “and although it definitely is only for kids in the way-back, how the hell are you supposed to get in and out of them on a regular basis?”

Despite the tight space for the family, the Q7 continues to impress with its interior styling. The new dual-screen setup we’ve seen in the Q8 SUV and A6, A7, and A8 sedans makes its way into the Q7, ditching the small screen on top of the dash and welcoming a new infotainment experience. The Q7’s tech-savvy interior makes a great impression with its two 10.1-inch haptic touchscreens, leaving the top one to focus on the infotainment system while the lower display is home to the HVAC controls. Still, we’d like real buttons.

If that wasn’t enough, a 12.3-inch digital instrument cluster shows the driver a full-screen Google Earth map when the navigation system is on. Besides the high resolution, the graphics look modern and add to the upscale interior experience.

When looking at the rest of the criteria, however, the Q7 fell short in terms of Performance of Intended Function, Value, and Efficiency—three important elements in our Of The Year evaluations. “It feels like a slightly different take on the other Audi SUVs, and there’s nothing new, exciting, or groundbreaking,” features editor Scott Evans said.

When it made its debut in 2016, the Audi Q7 caught the attention of all the judges during our 2017 SUV of the Year evaluations, where it advanced as a finalist. The updated Q7 in SQ7 guise, though, needs more to impress us.