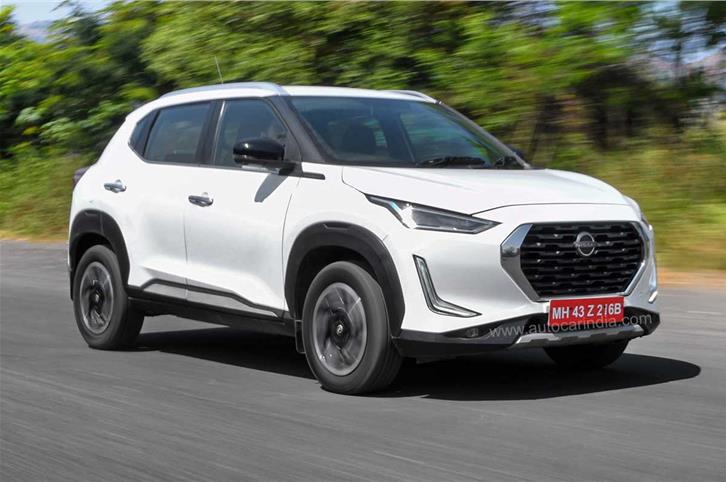 It’s been just over a year since the Nissan Magnite was launched in India and shook up the compact SUV segment. We have already driven the fully loaded turbo-petrol version, and it left us quite impressed. But now we get to experience the more affordable, naturally aspirated version for the first time. Is it as easy to recommend as its costlier turbocharged counterpart? That’s what we are here to find out.

Let’s start with the engine, which is the biggest change on this variation of the Magnite. Under the hood lies a 1.0-litre, three-cylinder naturally aspirated (NA) petrol engine, codenamed B4D. As you would expect, at 72hp and 96Nm, it is significantly down on both the power and torque of the turbo-petrol engine (by 28hp and 64Nm). However, to Nissan’s credit, the Magnite 1.0 feels quite smooth when you pull away from a standstill and the power is delivered in a linear manner.

That said, this engine is not the punchiest unit out there, especially given that peak power and torque come in quite high in the rev range. This results in the Magnite feeling quite lethargic when caught in the mid range, and in order to get the best out of the engine you have to work the gearbox a fair bit. Revving it too high also has little effect, resulting in a lot of noise without too much progress. Stay within the engine’s comfort zone, however, and you will find there is enough performance on offer for the daily commute. At highway speeds, however, the Magnite 1.0 NA feels strained and a bit out of its element.

Speaking of the gearbox, we drove the 5-speed manual version. This unit is not the slickest in operation and what doesn’t also help is the biting point of the clutch, which takes some getting used to. Additionally, while the Magnite does share its powertrains with its sibling – the Renault Kiger – it misses out on the AMT automatic gearbox that’s offered with the 1.0-litre NA in the Kiger. This hampers its appeal as a city car to an extent, as more and more buyers are opting for the convenience of an automatic in the urban environment.

In the ride department, this iteration of the Magnite is quite similar to the turbo-petrol variant. There is a firm edge to the ride, which works well when travelling at speed as it smoothens out almost all the imperfections that come its way and feels quite stable. Though, on the flip side, at lower speeds the ride is a touch on the choppy side, thanks to this underlying firmness, and larger potholes do filter in. Cabin insulation is also not great, and on bad patches of road, apart from a fair amount of tyre roar, you can hear the suspension working away. This gives a sense that the suspension isn’t as robust as it actually is.

There is another positive to the slightly firm set-up, and that is the handling. The Magnite’s body roll is quite nicely contained and it handles the twisty roads well. The steering doesn’t provide a lot of feedback, nor is it very quick, though it feels nice and light at low speeds.

Design wise, Nissan has kept both variations of the Magnite identical, with their badging being the only way of discerning them visually. This is a very good thing, considering the Magnite looks very smart and well-proportioned. The sleek headlight, hexagonal grille and ‘L’ shaped DRLs give it a unique and very recognisable identity. In profile, you can also see the sharp creases and pronounced cladding around the wheel arches that add character to the Magnite. The rear looks very neat and I rather like the clean lines of the sculpted tail-lights and boot lid.

Step inside the cabin and you’ll be greeted by a well laid-out dashboard with a modern look. There are some neat design touches like the hexagonal AC vents that look like they could belong in a Lamborghini, the climate control screens that are well incorporated into the rotary adjustment dials, the 7.0-inch digital instrument cluster and the free-standing 8.0-inch infotainment (which by the way is quite responsive and easy to use).

There are also some nice features on offer like keyless entry and go, automatic climate control, the 360-degree camera (which isn’t the clearest), and wireless Android Auto and Apple CarPlay connectivity (which is a bit temperamental to use). There are also a number of convenient storage spaces around the cabin, including a huge glovebox and large cup holders, though the fixed front centre armrest feels like a missed opportunity for another storage space. The way the dash is recessed and the central console is placed low also give a great sense of space for a car of this size.

An area where the Magnite is lacking is quality of materials. While they are for the most part acceptable for the price, there are rivals in the market that not only feel better appointed but also better screwed together. Things like the exposed steering rack in the driver’s footwell also don’t help the perceived quality. One big exception here is the denim-like fabric Nissan has used on the various elbow rests around the cabin – it’s a premium feeling touch in an otherwise dull and lacklustre cabin.

The front seats offer a good view out and are well cushioned, offering good amounts of comfort. Rear seats are also quite comfortable, offering plenty of space (even for taller passengers) and good levels of under thigh support.

One of the biggest appeals of the Magnite 1.0 NA has to be its price. Starting at Rs 5.71 lakh for the base XE trim and going up to Rs 7.85 lakh for the top-spec XV Premium trim (ex-showroom, Delhi), this iteration of the Magnite offers some real bang for your buck. There are few hatchbacks that can provide this level of kit and space for the same price, let alone compact SUVs. However, this naturally aspirated engine really struggles to offer strong performance. This doesn’t matter as much when looking for a daily commuter to use in the city, however, as an SUV to use for long distance travelling, it is a limitation. The lack of an automatic gearbox option with this engine does also hurt its potential as an urban runabout, but if it’s sheer value you’re after, the Magnite B4D is hard to beat.