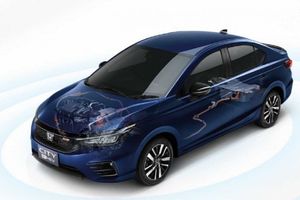 2022 Honda City Hybrid To Launch in India: 5 things You Should Know

The upcoming Honda City Hybrid is speculated to be nearly production-ready and inching closer to showrooms in India. The sedan is scheduled for launch in the second quarter of 2022, most probably around April-May.

The fifth-generation Honda city elevated the compact sedan space with its premium styling and posh features. Its appeal has now further grown with the addition of a new hybrid powertrain, which makes the car more fuel-efficient on top of that. The same is expected to launch in India in the second quarter of mid-2022, most probably around April-May. Below here we have discussed some of the features of the upcoming Honda City hybrid that you should know about.

Starting off with mains directly is the hybrid engine. The Honda City hybrid will be a proper hybrid with electric motors and one massive battery. The specs are yet to be confirmed. It’s fully hybrid, compared to the mild-hybrid Maruti Suzuki Ciaz that equips a starter-generator motor only.

The Honda City hybrid will feature the i-MMD eHEV hybrid powertrain. This system equips two electric motors that allow you to drive on pure electric power as well. The Honda City Hybrid is sold in the Malaysian market and Thailand market, where the Honda City has a claimed mileage of 27.8 kmpl and 27.7 kmpl, respectively.

Under the hood of the upcoming Honda City is a 1.5-liter petrol engine that produces 98 Ps and 127 Nm of torque alone. As mentioned before, there are two electric motors that the engine comes mated to, and the main electric motor produces 109 Ps and 253 Nm of torque, powering the front wheels via fixed gear ratios. The combined power and torque features is yet to be combined. Transmission duties will be handled by a CVT automatic gearbox only.

Honda has equipped the hybrid City with quite a sizable battery pack, that not only makes it heavier by 110 kgs, it also eats into its boot space. The Honda City Hybrid has a boot space the size of 410-liters, compared to the regular Citys massive 506 liters of boot space. The hybrid model will also lose out on the spare tire, and get a puncture repair kit instead.

Due to its weight increase, Honda will equip the City hybrid with rear disc brakes and electronic brakes as well, for added safety.

This is not the first time that Honda will be launching a hybrid vehicle. Both the Civic and Accord have had hybrid iterations in the past with quite the premium price tag at Rs. 21.5 lakh and Rs. 40 lakh, respectively. The upcoming Honda City RS is expected to cost from Rs. 21.00 lakh onwards. For in the Malaysian market, the City hybrid costs RM105,950 (Rs. 18,64,607), and in Thailand, it costs around Rs. 20.44 lakh (INR equivalent)