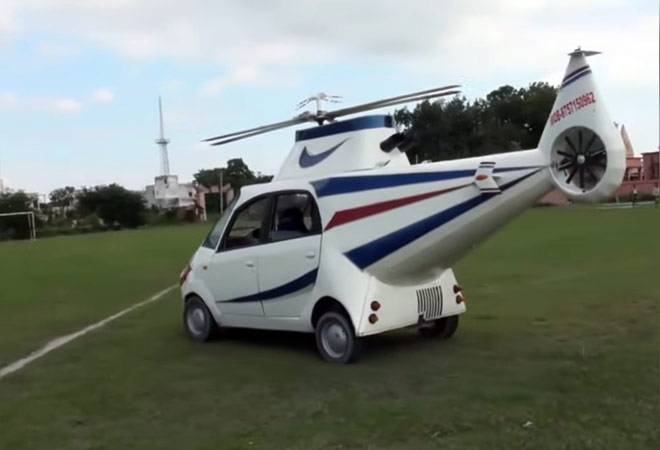 Tata Nano converted into a helicopter

Necessity is the mother of invention, and this saying perfectly describes a mechanic in north Bihar, India. Guddu Sharma, the owner of a four-seater hatchback, decided to cash in on the growing trend of grooms hiring helicopters to make a grand entrance to their wedding destinations.

He incorporated sensors into the vehicle to provide the features he wanted. The mechanic spent around ₹ 2 lakh to transform his car into a helicopter, according to an Indian newspaper.

When it comes to weddings, Guddu says there is a high demand for helicopters because prospective grooms want to fly their bride home, but they lack the money to do so.

As a result, he converted it into a helicopter that anyone could afford. It is a living example of self-reliance in the Digital India era. If you want a “helicopter,” you’ll need a lot of money.

He claims that 19 people have already reserved his clever invention. You can rent a helicopter for Rs 15,000, and others have also converted their cars into helicopters, but he is the first.

Mithilesh Prasad wanted to build a helicopter from his childhood. This motivated him to converted his Tata Nano into a helicopter. It took him 7 months to complete the project.

Read also: No Fuel Without Pollution Under Control Certificate(PUCC) In Delhi