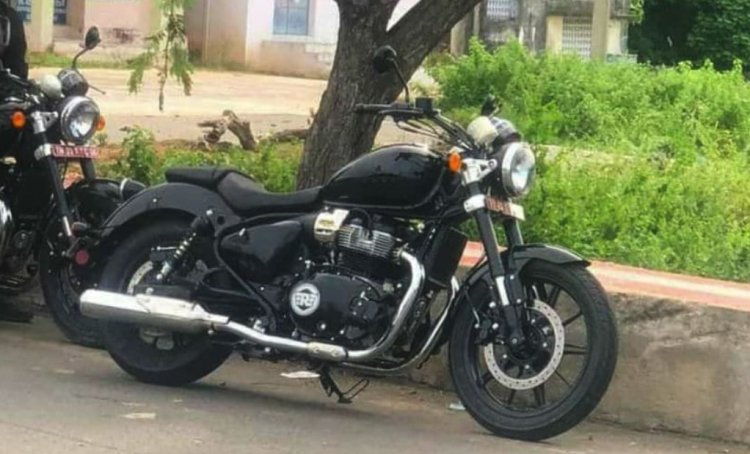 Royal Enfield continues to test its upcoming cruiser motorcycle based on its highly-popular 650cc platform. The 650cc Royal Enfield Cruiser was spied testing for the first time in August this year and now it has been spotted once again.

The latest spy shot shows two 650cc Royal Enfield Cruiser prototypes. While one is clearly visible, only the front portion of the other has been captured. Both of them wear no camouflage whatsoever and, thus, reveal most of the details.

The new 650cc Royal Enfield Cruiser would feature a teardrop fuel tank, single-piece handlebar, and low-set seat. For the front end, the company has used a familiar-looking round headlamp, however, adding boldness to the aesthetics is the pair of USD forks. The rear part of the motorcycle carries the overall retro-styled theme and the big fender here reminds us of Indian Motorcycle bikes.

While the instrument cluster of the 650cc Royal Enfield Cruiser looks identical to that of the 650 Twins, the company might add the new Bluetooth-enabled features that have been incorporated in the upcoming Meteor 350.

Unlike the Continental GT 650 and Interceptor 650 which have wire-spoke wheels, the new 650cc Royal Enfield Cruiser would use alloy wheels that are most likely to be fitted with tubeless tyres. It means that riders wouldn’t have to worry about punctures as they can be easily fixed in this case.

Powering the new Royal Enfield Cruiser will be the same 650cc parallel-twin engine that we have seen in the 650 Twins, where it produces 47 bhp and 52 Nm. These figures are most likely to remain unchanged, however, the company might alter with the gear ratios of the 6-speed transmission to match the character of the motorcycle.https://www.youtube.com/embed/e08SezQysfA

Royal Enfield is expected to price the 650cc cruiser very competitively, just like it did with the Continental GT 650 and Interceptor 650. We wouldn’t be surprised if the pricing starts from INR 3 lakh (ex-showroom). Combine this with the vast service network of the company and the fact that Harley-Davidson has exited the Indian market, we see a very solid future for the 650cc Royal Enfield Cruiser.