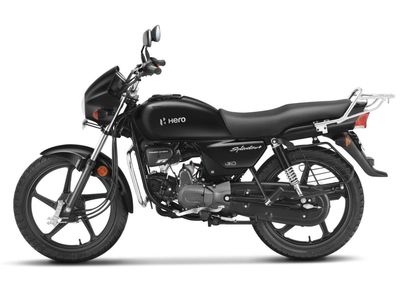 Hero has launched its most affordable bike in India

Hero Motocorp has launched HF 100 to compete with the likes of Bajaj CT100 and TVS Sport in the commuter bike segment.

India’s biggest motorcycle maker Hero Motocorp has launched its most affordable two-wheeler Hero HF 100. The bike will be priced at Rs 49,400 (ex-showroom, Delhi). It is positioned below Hero HF Deluxe model range.

The newly-launched bike will compete with the likes of Bajaj CT100 and TVS Sport priced at Rs 44,890 and Rs 55,66 (ex-showroom, Delhi) respectively. It is one of the most basic commuter bikes in the Indian market and will be sold in only one colour option – Black with Red.

Hero HF will come powered with a single-cylinder 97.2 cc air-cooled engine. The engine will run on fuel injection technology. It will churn out 7.91 bhp of power at 8,000 RPM and a torque of 8.05 Nm and 5,000 RPM. The engine will come mated to a four speed gearbox.

Hero HF 100 will offer telescopic fork suspension setup at the front and hydraulic shockers at the back. The weight of the bike is 110 kg. Braking duties will be done by 130 mm drum brakes on both rear and front ends.

Hero HF’s styling is largely inspired by Hero HF Deluxe. However, chrome parts are replaced by black colour. Both the bikes are same in dimension. The bike will also offer Hero’s XSens System that includes a set of sensors to help bike generate optimum levels of power all the time. It will also come packed with patented i3s system to help commuters save more fuel in city traffic.

Hero Motocorp will be targeting tier 2 and tier 3 markets with this bike.