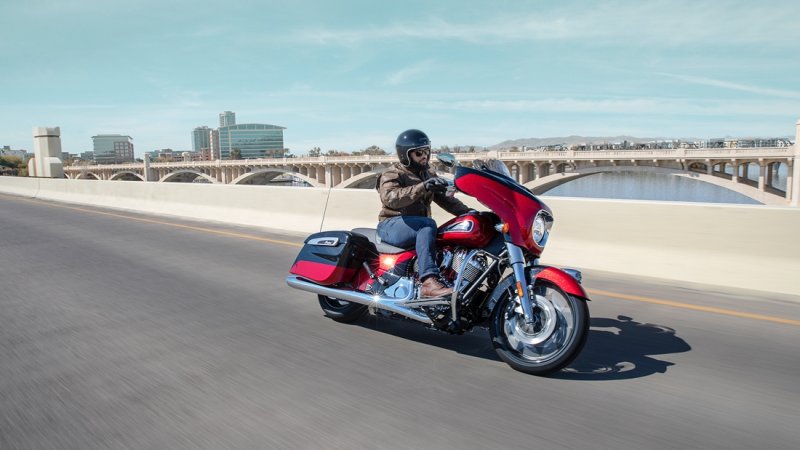 Indian Motorcycle is adding new features, a new Dark Horse touring model and a redesigned Ride Command infotainment system and app for its 2020 heavyweight Thunder Stroke lineup. But the big news is that it’s adding its 116 cubic-inch engine as standard in several models for the first time.

The Thunder Stroke 116, previously offered as an upgrade package for the 111 cubic-inch engine, is an air-cooled, 1890-cc V-twin engine with a new high-flow cylinder head, increasing torque to 126 pound-feet, from 119 lb-ft. It comes with Indian’s rear cylinder deactivation for engine cooling in slow-moving or stopped traffic, and it’ll be standard on seven models: the Springfield Dark Horse, Chieftain, Chieftain Dark Horse, Chieftain Limited, Chieftain Elite, Roadmaster and Roadmaster Dark Horse. The Chief Dark Horse, Chief Vintage, Springfield and Chieftain Classic all stay with the 1811-cc 111, while the Chieftain is available with both engines.

The premium bagger in Indian’s lineup gets the 116 engine plus the PowerBand Audio Plus system, which is 50% louder than Indian’s standard audio setup, with integrated fairing and saddlebag speakers. You also get a two-tone color scheme, what Indian calls thunder black vivid crystal over wildfire candy paint with matching badging and highlights on the motor. It also gets precision-machined wheels, pinnacle mirrors, select rider floorboards and a flare windshield.

Rest of the lineup

Indian is now sharing the Springfield chassis with the Chief Dark Horse and Chief Vintage for improved handling and adjustable rear suspension for the latter two, and the Springfield and Chief Dark Horse now get 17-inch front wheels for improved stability. The Roadmaster is now lighter in weight and gets a redesigned trunk rack. And of course there are plenty of accessories on offer to boost performance, including stage 1 slip-on exhaust, muffler kit and performance air intakes.

Pricing starts at $18,499 for the Chief Dark Horse on the low end and $34,999 on the high end for the Chieftain Elite. All models are arriving in dealerships now.